There are few artists that inspire joy from their work. Agneta is a child of nature, who was initially inspired by her father’s work but later ended up following in the footsteps of renowned architect Eileen Gray. A big part of the driving force behind her choices has been in meeting new people, and a lot has been about instincts.

A gray Tuesday in Stockholm, I meet with Agneta. She describes how different energies have unique effects, just like the gloomy darkness in Stockholm in February can feel quite heavy. Yet, the heavy feeling is blown away by stepping into her showroom. Here the Azul Blue color dominates, leaving behind a breezy and calm lifeforce.

With clear goals in mind, she moves forward. She shares a quote from her father that continues to direct her actions, “A sitting bird gets nothing.” Sitting still does not describe Agneta. Moving forward and getting things done makes her an equivalent counterpart to Kajsa Kavat in art.

After finishing her studies at Anders Beckman’s school in Stockholm and then completing an arts degree at the San Francisco Art Institute, she decided to head back to France, where she had spent much of her childhood. As a teen, she lived partly in Riviera with her family. Her father, who was a businessman in Paris, had bought the grand villa of Karl Gerhard in Roquebrune-Cap-Martin. This part of the Riviera came to be the inspiration for the now modern and iconic “Caffe Latte.” Another source of inspiration came when she met her husband and later had three children. With a baby at home, she started to work more with clay. The timing was perfect as the demand for her handmade ceramics was overwhelming. With various clients such as IKEA and Habitat, she could expand production to factories in Portugal and Italy. Anything to meet demand.

The true driving force behind her success has come from the fact that she is a creative, curious, and fearless person who gets things done.

We often, during the conversation, come back to the thesis of taking risks. Moving to the US to enroll in an arts college demonstrated this willingness to take risks early, shares Agneta. “If nothing is happening, you have to get it done yourself,” is the thesis that Agneta embraces—the idea of going “all in.” Her vision of recreating and learning has given her insight into making mistakes and why, in the end, those who are willing to make mistakes and learn from them will be rewarded for it. She gives an example of her time spent working with the company Williams Sonoma in the USA. Agneta’s job was to create an entire collection of designs and patterns. Agneta worked on the Italian patterns for over a year. The day before New Year’s Eve, she got a call telling her the project was being shut down.

Agneta had not received a down payment and an entire year’s work was down the drain. It was a difficult New Year’s Eve, she acknowledges. But pity those who give up. Agneta decided to keep the project as her own, moving forward with developing the product. A short time later, she released the herb plates that had been part of the previous year’s work. These are now among her bestsellers. That’s Agneta in a nutshell. Using setbacks as a trigger for prosperity.

Agneta is always accepting new challenges and dares to take risks. When something feels heavy or difficult, she will take another way around.

An example that shows the importance of thought, touch, and realization is the project in Torekov. At the location, she brings her son for a walk across the open fields, and they stumble across a lot, situated beautifully. Here Agneta caught a feeling—I want to live here. Her son, as well as her husband, told her, “Well then buy it!” Said and done. She called up the broker and signed a contract the very same day. This is still Agneta in a nutshell. If something feels right, then go for it. Timing is everything, and she seems to bring it with her when a decision is supposed to be made. Had she been a more “normal” person, she would have gone home and thought it through.

As mentioned earlier, Agneta goes “all in.” Her vision is to materialize and pull wisdom from the fact that the big failures leads to the biggest successes.

Moving forward with the deal ultimately turned out to be the right thing. Agneta started drawing up sketches of what would become her dream house. She describes the feeling of designing her ceramics, paintings, and other small decorations around her new house, as just like magic, the rush of life. There she stood in the fields of Torekov, right between the sky and the ocean. Her preceptive architect later brought everything to life. Agneta tells of the lovely fields where she played as a child, which had now become her own paradise. Look forward, create by doing something new. She could additionally add a new title to her lengthy resume: Building contractor. La Casa Del Mare, which Agneta had created, is a modern house inspired by the French-Italian Riviera.

It all summarizes the feeling she had growing up on the Mediterranean coast. With a view over Kattegatt towards Hallands väder island, the wind and the ocean served as inspiration. The building is the work of an artist who blends in perfectly in the untouched fields. This building also summarizes a big part of her journey as an artist. All of the art and created objects were planned to fit in. The water lily was often found in her artmaking, and so a pond was added with water lilies that float freely. The house built in 2017/2018 is easily manageable and has a showroom nearby that allows for a division of space between the private and the business. The architect employed white lime rocks in the design because it protects both from the summer heat and the winter cold. In the center of it all, Agneta could settle. The fascinating part was that she now had headed into a new phase, as an architect and building contractor.

To create a whole house was one of the biggest art projects yet, shares Agneta. “But I only see my journey’s beginning. Where it ends, nobody knows.” For Agneta, the motivation is the way forward. We have a lot to learn from this woman. In the middle of the interview, she peeks at her computer. “I just have to book a trip.” Multitasking. “I just can’t stay here is this grey climate,” Agneta adds. We continue the interview, but within a couple of minutes, she has managed to simultaneously book a trip to Côte d’Azur. “There you can find warmth and joy during some of the winter months.” Agneta points out that while she loves living in Sweden and everything it comes with, the darkness affects her. The inspiration stops there.

The trip has been booked and Agneta is smiling, on the road again. I can feel in my heart that she would never seek to escape from anything, but rather she would simply find another solution. I admire this charismatic woman who walks her own path and finds joy despite the bumps in the road. She sees the possibilities we all should see.
Go back 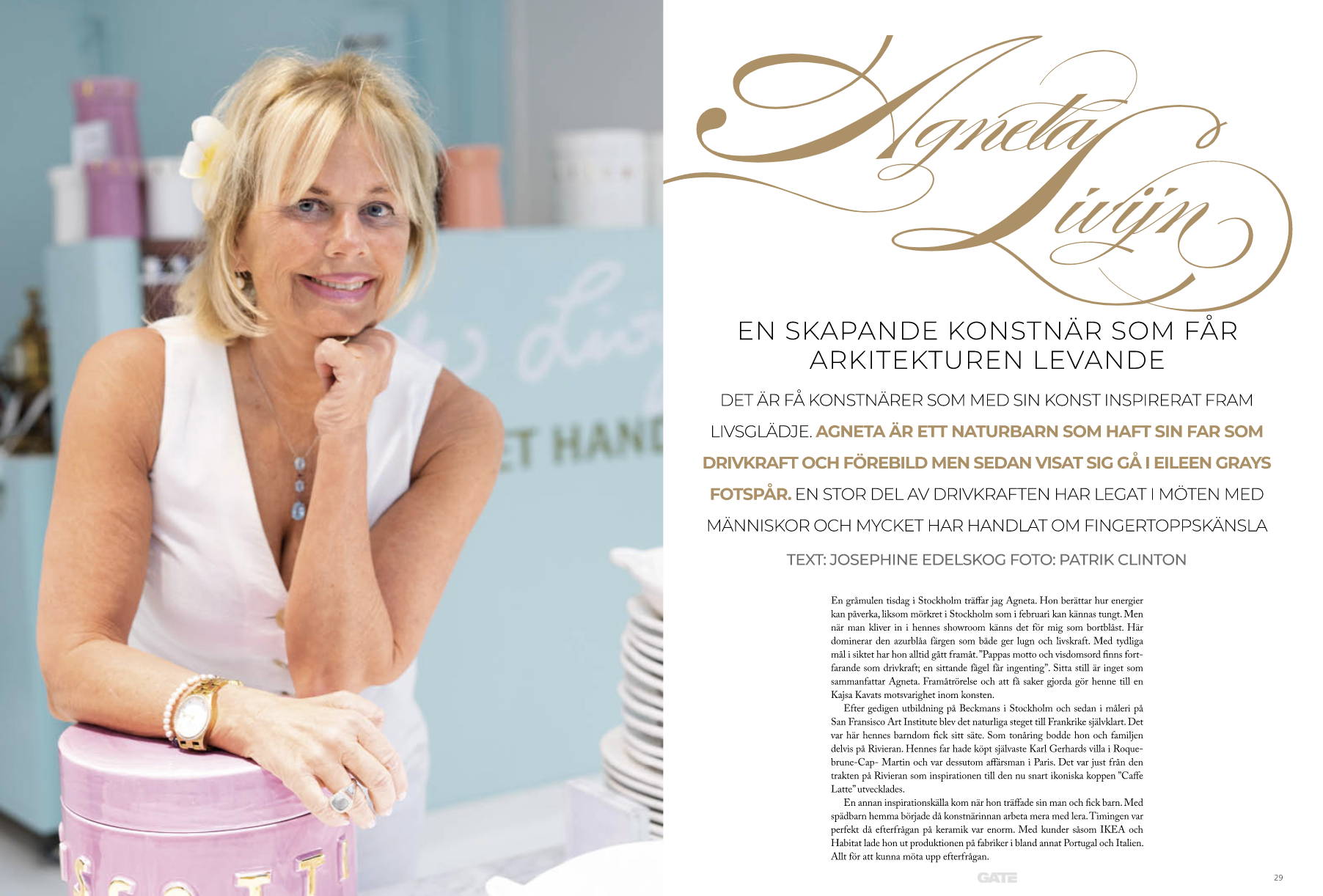 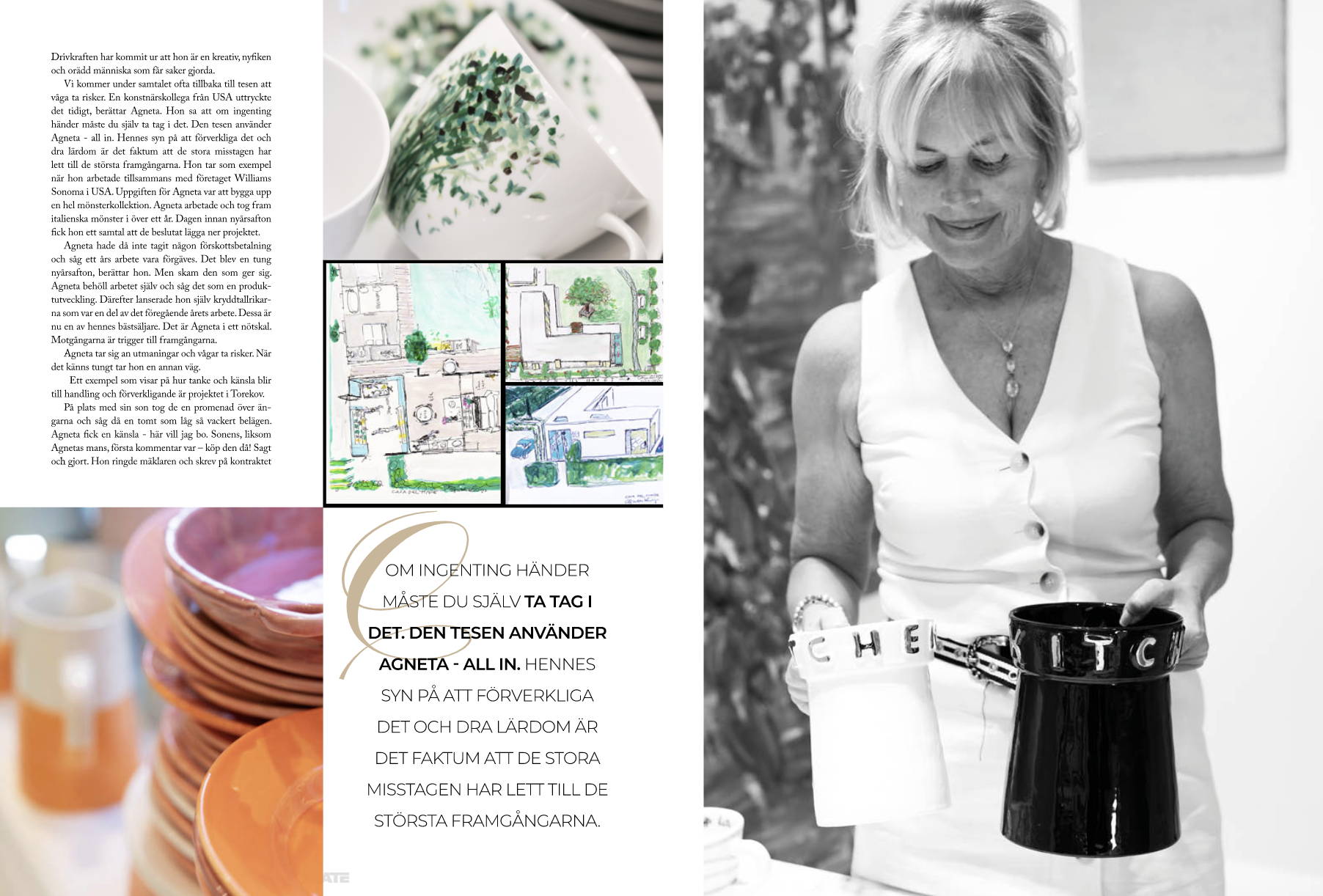 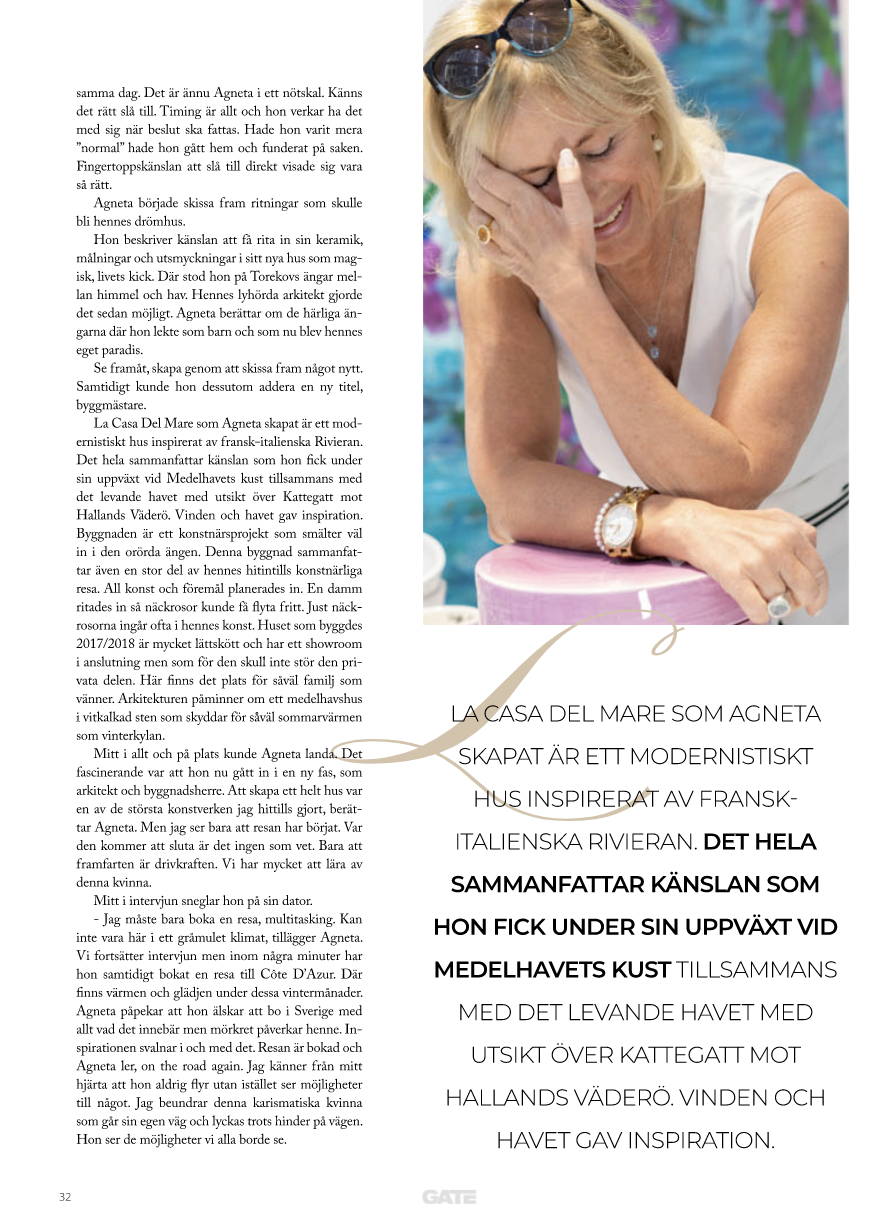 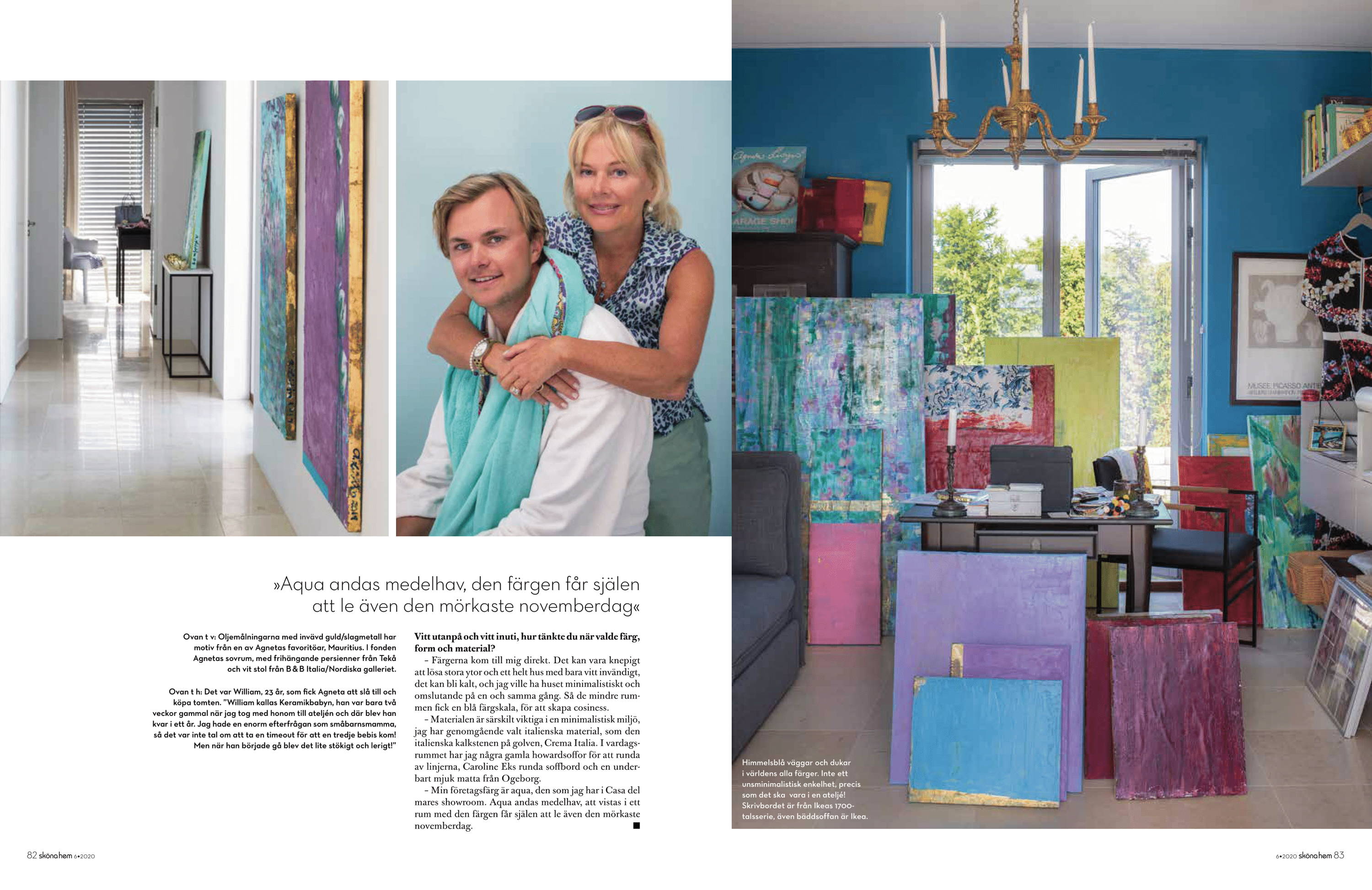